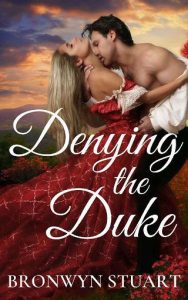 She had the best-laid plan for a secure future, until the wrong man stumbled into her trap. Now, she’ll learn the hard way what a stubborn effort it takes to deny a duke…

Emmaline Dubois thinks she could fall in love with Viscount Torrington, Charlie, given time and close proximity. He’s the perfect candidate for her inheritance and her person. He just doesn’t know it yet. In a scheme worthy of an award, she lays down a trap that will compromise them just enough; he’ll be forced to notice the predicament she faces and save her with matrimony.

Only, Charlie isn’t the man she finds herself alone in the dark with, succumbing to his kisses, and he isn’t the man who proposes to take care of her.

On a normal day, the Duke of Barrington would be furious to be duped by an almost spinster at his own ball, but like any other smitten idiot, he finds himself enchanted by the forward-thinking Miss Dubois and, soon, can’t keep his hands to himself. Everything would be perfect if she hadn’t convinced herself Charlie was the man for her. Now, he has to do everything in his power to change her mind, even if it means not keeping his hands to himself…