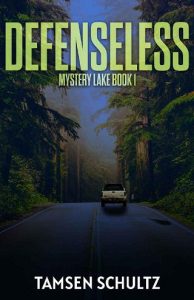 A murdered woman, a powerful politician, and a witness who’s no longer willing to stay in the shadows.

Eighteen years ago, Bela Houseman became a loose end. The powerful man who murdered her mother knows who she is and exactly what she saw that night. Giving up everything she’s ever known, including her own name, is the only way to protect herself. Now, as the lead cyber security expert at HICC, an elite private security firm, Sabina O’Malley has mostly made peace with her past. Until a postcard arrives on her doorstep that shatters her carefully crafted safety.

There are two things special operative, Chad Warwick knows for certain. The first is that he’s wanted Sabina since his first day at HICC. The second is that she’s hiding something—something big. Her ability to evade questions is practically an art form, though, and the bits and pieces she gives him aren’t enough. They aren’t enough for him to help her. Nor are they enough for him to take a chance and love her the way he wants to.

But when an ambush occurs on a secluded mountain road and Sabina is the target, she knows the killer is finally cleaning house. Now, revealing all her secrets and exposing the truth is the only way she’ll ever be safe. From California to São Paulo to Washington, DC, Chad and Sabina uncover a trail of murder, corruption, and fraud. A trail that could tear them apart just when they’ve finally come together.