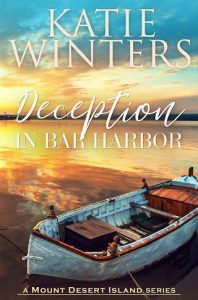 Nicole Harvey faces the trauma of her past abusive marriage and learns that the only thing holding her back from having the life she really wants — is herself.

Manipulative. Cruel. Egotistical. Nicole’s long-time husband, Michael Baxter, was a lot of things — but Nicole stayed by him, loving him and raising their children, for as long as she could, even as her self-worth whittled down to nothing.
When he left her for a younger woman and abandoned her and her children, she had nothing left. She was forced to move in with her older sister, Casey, without hope to rebuild. For years, she worked in marketing; but even that job dried up.
Nicole now finds herself with a single shot at a different life — to go to Bar Harbor and help her Uncle Joe with the Keating Inn and Acadia Eatery. It’s her last link to a long-deceased father she never knew — and her last chance at reaching her long-lost goal of being a chef.
But secrets are discovered and deception awaits her and her sisters in Bar Harbor. Nicole finds herself caught in a web of lies, struggling to keep her late father and uncle’s business afloat.
Dive into this new clean and wholesome, women’s fiction series, Mount Desert Island – an unfolding family drama of heartache, longing and secrets on a beautiful island off the coast of Maine.