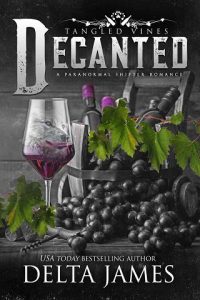 He only has plans to eradicate the Hunters…until he must chase down his fated mate.

The Hunters are becoming bold. Damian Steel has called a summit of all wolf packs along the Pacific Coast. When Hudson Rhodes arrives on the same motorcycle Steve McQueen once rode, he is expecting nothing more than to come up with a plan to eradicate the Hunters… turning predators into prey.

The last thing he expected to feel was the call of his fated mate. Shasta Warren, the bad girl of the Sonoma Pack, is only willing to be the mistress of her own destiny. But when the Hunters attack and Hudson sends her away to save herself, Shasta can’t help but come to the brooding alpha’s aid.

As Hudson recovers from his wounds, Shasta slips away to begin a secret new life in the Crescent City. But she won’t be able to hide forever. The Alpha of New Orleans is known as an incurable romantic and jumps at the chance to help his old friend, Hudson, bring his fated mate to heel.