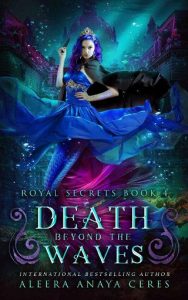 Princess Odele has finally been found, and her appearance brings secrets that the kingdom of Thalassar has been harboring. Secrets that Maisie refuses to accept.
Unwilling to acknowledge her royal lineage, Maisie hides the truth from those she loves most. Her mermen can never know that she bears a title she doesn’t deserve or want. And she will keep it from them.
No matter the cost.
Together, Maisie and Odele will work in secret. They’ll swim in the shadows and be forced to rely on each other. To discover who was behind their assassination attempts. To expose the one who killed their family.
And to save their kingdom from downfall…
…once and for all.
Death Beyond the Waves was previously published under the same title. This is a second edition with a new blurb, new cover, and new scenes.