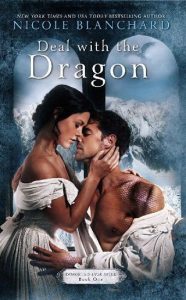 I had to mate a beast to save my kingdom.
Unlike the rest of my kind, I was unable to shift into an animal form rendering me ineligible for the throne I’d been raised to inherit.
I was banished to a temple to remain in isolation until the day would come for me to fulfill a promise.
A promise brokered by my family to protect our people from the growing threat from mortal humans: marry the last remaining dragon—a man so violent and untamed some say he killed his first mate in a fit of rage.
Was it possible for a man to be both a beast and beautiful?
Powerfully built, deadly handsome, and gifted with limitless magick and strength, my mate wanted for nothing.
Except an heir.
He believed I could provide him with with a son and break the curse that infected all of shifter-kind.
I soon learned there were bigger worries than a dragon’s teeth. The real threat…was capturing his heart.