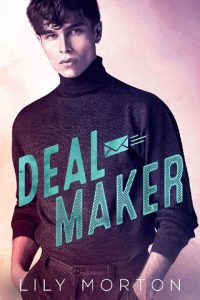 Sometimes your mouth makes deals that your heart can’t honour.

Jude is a highly successful model, but a very reluctant one. His life is full of casual hook-ups with pretty men in glamorous locations, but it’s still empty. However, circumstances decreed a long time ago that this was his path, so he’s resolutely stayed on it and accepted his fate with good grace. He made a deal with himself and his hook-ups. Get in, get out and no ties with anyone.
However, an accident at home one night leads to him making a new deal and accepting the offer of help from an unlikely source. It leads to an unexpected summer of falling in love with a larger than life man and his child.

But by the end of the summer his reasons for not staying are still valid. Will he turn away? Can he?

Asa is a talented actor who has spent time away from the scene to look after his son. But now he’s back, and the last thing he needs are complications from the gorgeous man who is staying with him. Scarred from too many betrayals, he has no intention of forming a lasting tie with anyone. However, he can’t resist the beautiful man with secrets, and to his horror he develops feelings.

But a deal’s a deal and they said it was just for the summer. What can Asa do with a man who has forever in his eyes and goodbye on his lips?