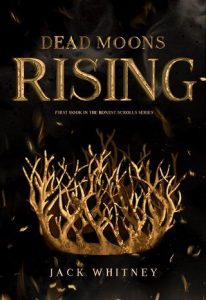 Aydra Ravenspeak has lived peacefully in the kingdom of Magnice her entire life. She rules as Queen over the northeastern realm of Haerland with her loving brother, King Rhafian Sunfire, and her younger siblings. Their kingdom knows only prosperity, sanctuary, and peace. A loving home for all their people.

Of course, these are all lies.

When Aydra rides out to the Forest of Darkness for the rise of the Dead Moons, she is injured in the enemy king, Draven Greenwood’s, realm. What she learns whilst recovering there shatters the world she knows. She has been engulfed by lies within her own kingdom. Forced to smile and dine at banquet as nothing more than a trophy. Given a title no person ever intended on allowing her to use.

But the lies that throw her the most are those she was told about him.

Strangers arrive on their shores, and she’ll have to work with Draven to stop them from taking their lands. The secrets of her kingdom and Haerland begin to unravel, and Aydra is soon faced with an impossible decision as the war begins.