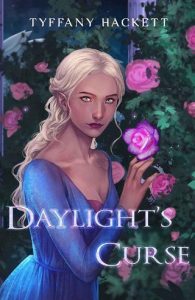 The title is a curse, whispered throughout the elven holdings. After the Ninth War ravaged Numeryon, leaving its citizens impoverished and desperate for survival, a moniker like Mald Magicae could be a death sentence. So when Sabrena is extended a tantalizing offer, she leaves everything she’s known to marry the Prince of the Fae—even though she’s never met him.
But the prince has problems of his own.
To end the war and save his people, Prince Kiran bargained with the High Sorceress of the Trolls to cease their relentless attacks. For one hundred years, Kiran was cursed to roam as a dragon by day. And by night, he would return to the form of a man.
But even that small reprieve came with a price.
A price paid heavily when an elven woman shows up in his home, a bride meant to placate the rift between the fae and elven people. But Sabrena proves far more of a temptation than Kiran anticipated. She is fierce, kind . . . beautiful. And she’s not afraid of him.
Time is running out but the High Sorceress of the Trolls doesn’t want to see the prince freed from his waking nightmare. She’s impatient, waiting for him to break the terms of their bargain. If he does, he’ll be forced to marry her beloved heir—a bold move that will finally allow her to seize control of Numeryon. But she underestimates the Mald Magicae at his side.
And how far Sabrena will go to free her prince from this curse.