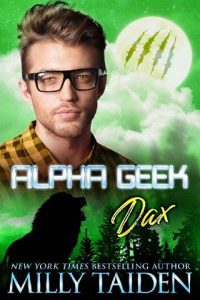 Leopard shifter Meghan Bennett had an award-winning career as a police detective, but she left the force behind after corruption got the better of her team. Now she’s one of the top agents in Nick’s shifter security force, and she’s about to face her biggest challenge yet—a smoking hot geek with a heart of gold and a big old target on his back.
Since scientist Dax Hall lost his parents to cancer, he’s devoted his professional career to the dream of ending the disease. With advances in nanobot technology, he’s finally closer to a cure than ever before, but someone out there doesn’t want him to succeed. When he can no longer ignore the danger, he reluctantly accepts a security guard and is floored when the agent assigned to him turns out to be sexier than the lustiest dark-haired beauty of his wettest dreams.
But when Meghan cannot stop an attack on Dax, she has to make a grim decision. When the geek awakes, everything he’s ever thought he’s known about life and science has been changed. Will the choices Meghan made for him be worth the chance at giving his cure to humanity…and at letting Dax and Meghan have a long life together?