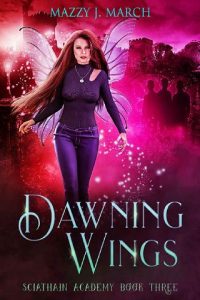 My wings have emerged, but they aren’t what I or anyone else expected.

Also I have not two but three guys in my life. Until I arrived at the Sciathain Academy immediately after high school graduation, I believed I would live an ordinary life. For a small-town girl, raised by parents who loved one another and me, learning my fairy heritage came as a shock to say the least.
But the surprises that awaited me at the Sciathain Academy were many, and I couldn’t help but resent my parents for protecting me from…from I still didn’t know what…then thrusting me into the world they’d left behind.

So, here I am at the college of their choice, doing my very best to learn in a whole new style I seemed not to have a talent for, trying to produce wings that cooperated not at all, being lured by a shimmering veil that apparently was the doorway to our family’s version of an ancestral home—a home I was forbidden to visit despite its nearness—and on the cusp of a relationship with three different guys who had no problem with sharing.
Oh…and a creeping darkness had scared the crap out of me. But maybe it was a one-time visit…

I still have to figure out what kind of fairy I am because the wings and the veil calling me, well, that doesn’t usually happen. Students and even Titania can’t stop staring.
Once I was an oddity for being raised as a human and now I’m a threat because of the appearance of my wings.
At least I have my support system. Now if the three of them could get along.