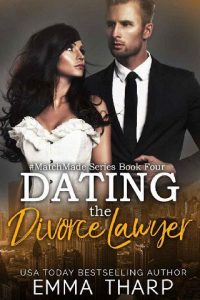 She’s in marketing and thinks every man who hits on her is using a sales pitch. He’s a divorce lawyer who sees how ugly marriage can be. Somehow, they’re set up as the perfect match by a matchmaker.
Vivi has officially sworn off men. She’s tired of liars, cheaters, and slimy gimmicks. It’s easy to dissect every ploy, approach, or pick-up line. She prefers to be on her own. There’s less heartache and disappointment that way. Except now, her friend is insisting that she get matched up as part of her new role at #MatchMade.
Normally, Jude attracts two kinds of women: gold diggers eager to enjoy the fruits of his labor, or the nice girls who dump him when they find out he’s a divorce attorney and imagine that he’s cold, heartless, and unwilling to commit. The nice girls are mostly right. When he and his best friend pressure each other to join a matchmaking website, Jude thinks there’s no way it could work for him. Until he gets a match.
Their first meeting isn’t ideal, and when Vivi proposes that they complete their mandatory three dates as fake dates, Jude doesn’t have much of a choice and agrees. It could be fun, faking it for three dates. Jude is going to make them count. If nothing else, Vivi is going to miss him. It never occurred to him that he might end up missing her, too.