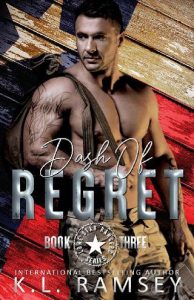 Cricket Austin made her best friend Tessie a promise that she never thought she’d have to keep. She vowed to raise her daughter, Daisy if something happened to her. Tessie didn’t always make the best decisions and jumping into the back of some guy’s pick-up for a quickie wasn’t her finest move. But, her mistake turned into a little miracle named Daisy. Cricket vowed to be the best “Auntie” a girl could ever have, but that all ended the day the police showed up on her doorstep to tell her that Tessie was gone. Cricket knew that she wasn’t ready to be Daisy’s mom, but a promise was a promise, and she planned on keeping the one she made to her best friend.

Dash King was finally out of the Army and ready to face civilian life. Taking the job at the FBI was a no-brainer. It would keep him grounded to his home base in Texas, and hopefully, allow him time to meet the right girl to settle down with. That was the plan until he found the face of his biggest regret staring back at him from the newspaper. The woman that he had drunkenly shared a quicky with, in the back seat of his pick-up, was dead. Her obituary spelled it all out for him—she left behind a two-year-old daughter who had his eyes, and the name that was tattooed on his arm—Daisy. It was his grandmother’s name and he was pretty sure that the little girl who was her namesake, was his. He wasn’t sure how he’d do it, but he planned on finding out if his hunch was right and then—he’d fight like hell to make Daisy a part of his life.