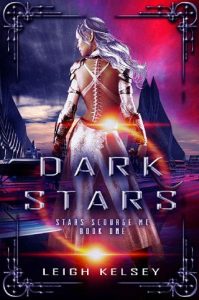 For as long as she can remember, Gem has been caged and exploited for her magic, but when a blackout swallows the empire, she makes her move and escapes her cruel emperor—right into the arms of a ruthless biker gang: dangerous Brand, psycho Hangman, adoring Prince, and a**hole Leviathan.
Claimed by the four men of the Stars Scourge motorcycle club, Gem can’t free herself without using her magic, revealing her whereabouts to the emperor. But life with the gang could be worse. Their manners are rough and they’re demanding with her body, but at least she’s free of the emperor as long as she keeps her magic quiet.
If these bikers keep her forever, she might be safe. But the emperor will stop at nothing to have her back.

Dark Stars is a science fiction alien romance with possessive biker men and a fierce, powerful heroine. If you like sci-fi with magic elements and a heavy dose of alien romance, you’ll love this book. This book is fast burn with moderate heat and multiple love interests. This is the first book in a duology.