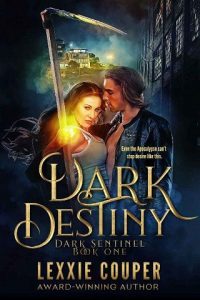 Is love enough to save the world?
The First Horseman of the Apocalypse, Pestilence is tired of waiting. Mankind is his to destroy. But first he has to defeat one of his own, the Fourth Horseman, Death, along with the lowly human she’s so fond of. The one prophesised to save the world.

Patrick Watkins wasn’t prepared for the way his body—and soul—respond to Death when she suddenly appears in his bedroom. He’s just a normal guy, saving lives at Australia’s busiest beach. But a lifetime of feeling he’s meant for something bigger haunts him, and it only intensifies at Death’s touch and crystalises with her kiss.

Death isn’t interested in bringing about the end of humanity. She’s focused on claiming the souls of the departed, thank you very much. And then she encounters Patrick Watkins. There’s an enigmatic significance to the sexy Australian that pulls on her very existence. And makes her question her very purpose. Falling in lust with a human isn’t a problem, but falling in love with one? The one who stands in Pestilence’s way. That’s dangerous. Apocalypse-level dangerous. When it comes to love or duty, for Death and Patrick, picking a side might just lead to the end. Of everything.

**Author note** Dark Destiny was originally released in 2009 as Death, the Vamp and His Brother. This edition has been significantly reworked/rewritten/refreshed. Yay!