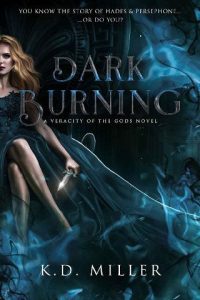 You know the story of Hades and Persephone…or do you?

Happily ever after had not been in the cards for Hades and his bride. Persephone, resentful of being trapped in the Underworld, betrayed Hades to his greatest enemy…and wound up murdered in the process. But an ancient prophecy foretold her return, and only then could Hades hope to finally win the war for the Underworld. He’s been patiently waiting for thousands of years, biding his time until her return, dying for the chance to defeat his foes at last…and get a little revenge on his former wife while he’s at it…
Now, he’s finally found her reincarnate in the stunning and deadly Skylar Pembroke. Highly trained, exceptionally stubborn, and oblivious to her past life, Skylar does not take well to being kidnapped by a God…no matter how brutally handsome he may be or how often she’s dreamt of him in the past. Determined to fight fate, Skylar will make life anything but easy for the God of the Underworld.
Now Hades must push aside thousands of years’ worth of anger, forget past wrongs, convince the femme fatale to marry him once more…and stop himself from falling for her all over again in the process…
What could possibly go wrong?