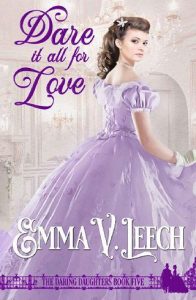 When Florence Knight is invited to stay at Holbrook House for the month of August, she is pleased to catch up with her friends and forget the disappointment of her last season. The young men in town are so dreadfully dull she cannot imagine ever wishing to marry one, and then she meets her hostesses’ brother.
Sophisticated, amusing, and some years her senior, Florence is frustrated that Henry seems not to know she exists. But sinister goings-on at his neighbouring estate catch her attention and fearing Henry is blind to the danger facing him, Florence decides he needs her help whether he likes it or not.

When Henry Stanhope returns home after many years abroad, he is pleased to discover his family home, Saxenhurst Hall has been well maintained in his absence. Yet odd things happen as soon as he settles back into life in England. The Hall was never haunted previously, and why do things keep disappearing and then turning up in the most peculiar places? Most unsettling of all is the appearance of The Maiden, a beautifully crafted corn doll that keeps appearing wherever Henry goes. Having travelled the world and seen many strange customs, Henry dismisses the events as quirks of the old house and the local community and puts them out of his mind.

Florence is less than convinced by Henry’s indifference, both about the goings-on at the Hall and his feelings for her. With support from her friends, she investigates, uncovering a centuries-old vendetta and finding herself in something of a bind.

A tenant for life…

When the strange events take a sinister turn, Henry wonders if perhaps Florence has a point and things are more serious than he realised, and he doesn’t just mean because a ghost tried to kill him. Florence has wormed her way into his heart, the dreadful girl, and he’s simply going to have to marry her. Except now he’s in a tight spot, and his future might be over before it has even begun.