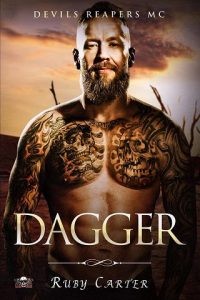 If there’s one thing I’ve always known, it’s that I need to dominate; in my club, over our rivals, and in the bedroom. I get what I want, and I’m always in control, chasing the pain and pleasure I crave with as many women as I can get—or at least I was, until I met Kelly fuckin’ Davis. She’s strong-willed, relentless, and she pushes my buttons like no other woman I’ve ever met. She may be 15 years younger than me, but I can’t quench my thirst for her. I want—no, I need—to own her ass…

He tells me I’m too young for him and that I shouldn’t play games, but no man has ever made this ‘little girl’ feel like Dagger does. I’ve needed more of him since the first time he showed me his deepest desires, but he refuses to give into the hunger between us. Luckily, even an ultra-alpha like him is no match for this feisty Latina. I need to be dominated as much as he needs to dominate, and it’s time to show him who’s really in control…

Determined that no woman can tame him, lifetime bachelor Dagger shuns relationships for a life of casual hook-ups with any woman he wants—except one. As much as he tries to fight his forbidden desire for her at first, Kelly Davis has other ideas, and Dagger finds his possessive instincts starting to win out. However, just as Dagger begins to surrender to the chemistry between them, a cruel twist of fate threatens to rip it from him forever.

As MC and Mafia collide and the stakes of club life become higher than ever, will Dagger’s desire for Kelly give him the courage to form an alliance from an unlikely source, or will his need for control spell the end of their connection—and life as he knows it—for good? Find out in the darkly explosive finale of author Ruby Carter’s Devils Reapers MC series, Dagger.