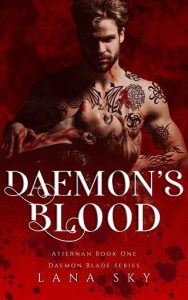 Miranda Lightwood is a good witch. A status she still strives for, despite being shunned by her coven and having her every move dogged by poisonous rumors to the contrary.

When a powerful daemon lord takes her hostage, trapping her inside his fortress, Miranda knows she’s about to face her most difficult trial yet. All that she stands for hinges on her ability to withstand his demands, no matter the cost.
But Atiernan subverts her expectations in the worst way. The savage, evil monster she’s been taught to loathe is the polar opposite of the strangely kind, and complex man he appears to be—and maybe, deep down, Miranda isn’t the saintly, innocent witch he requires to further his own manipulative ends.
The passion between them is strong enough to forge a bond capable of unifying their races toward the common good, but one wrong move and Atiernan knows he risks causing a rift that will usher in an ancient evil destined to consume the whole world.
The stakes are too high. He knows he can’t fail. No matter how strongly his little witch resists…