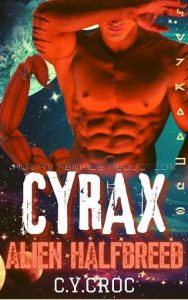 “After decimating a rival gang I’m left with their female—but females are trouble, and this one comes with a rocking hot body and accusing hate filled eyes.”

Cyrax was orphaned from an early age and left to fend for himself on the streets of the citydom. He learned early how to survive in the underworld of crime and deceit—violence and reckless abandon becoming his new family. Now, to keep his place at the top of the food chain in the ruthless underworld, he’s losing a small piece of himself every day, losing compassion for anything good that’s unfortunate to cross his path.

Will he be just as ruthless to a Human female who becomes an unexpected possession he acquires after his latest gang battle? With the Federation, the law of the Perinqual Galaxy and other gangs snapping at his heels, what will he do with her? He should drop the dead weight but she’s visually too appealing.

Bekka has had it tough her whole life—foster care and relationships with lowlife, good for nothing boyfriends who’ve leeched off her to fund their habits. Her childhood friend and co-worker at the lap dancing club she works at has been trying to persuade her for months to leave her latest beau and join her enlisting in the army for a fresh start. However, too scared to leave her boyfriend, it’s only after one grope too many in the club she finally relents, and plans to meet her friend outside. However, she’s stunned when she’s not there—but something else is.

Abducted by aliens she’s mortified when she realises she’s left one bad life behind for one much worse, even if the alien who now owns her makes her feel alive every time he glares at her with his brooding onyx black eyes.