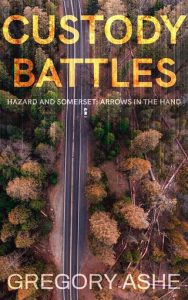 Some parents would die for their children. Others will do a whole lot worse.

Emery Hazard and his husband, John-Henry Somerset, are settling into their new normal—at home, with the latest addition to their family, and at work, as Somers adapts to his new role and Hazard manages his expanding agency. The only thing Hazard is worried about is getting through dinner with his in-laws.

When his father-in-law requests that Hazard and Somers join him for a weekend deer hunting, it sounds simple enough: spend a night camping, give their foster son a chance to spend time with his friend, and—possibly—prevent a parental kidnapping. But nothing is ever as simple as it sounds. At deer camp, Hazard and Somers find themselves drawn into a toxic family feud between parents battling for custody.

After the husband is shot and killed deep in the forest, detectives from the Sheriff’s Department are convinced that the killer is a local extremist—a member of the neo-Nazi Ozark Volunteers. Hazard and Somers, though, aren’t so sure, and as they probe deeper into the killing, they find that many people had a reason to want the victim dead, and the killing itself might not be what it seems.

Then a drive-by shooting almost claims the lives of Hazard, Somers, and the victim’s wife. The killer’s work isn’t done, and Hazard and Somers must race to find the truth before the killer strikes again.