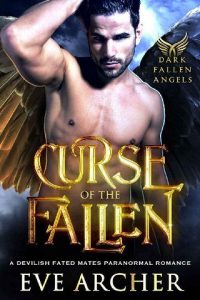 I thought it was the demons I needed to fear. I was wrong.
I knew what I was getting into when I sold myself to the devastatingly handsome mafia don. Then I discovered he was an immortal fallen angel.
Being the plaything of a billionaire is one thing. Being the mate of a celestial is quite another. Especially when he’s convinced I carry the mark of an angel and could free the Fallen from their eternal torment.
But not everyone wants the Fallen to be redeemed, including the shadowy Prince of Demons, who controls the demonic activity on earth.
My immediate problem isn’t with the demon prince, though. It’s with the rival mafia family who’s taken me captive—and the deadly succubus helping them.
I’m now a pawn in the deadly game between Dominick and his enemies. But this pawn is done being played. I’m about to show them what I’m made of–and it isn’t sugar and spice.