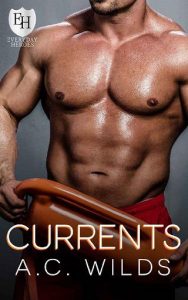 Carson Stagg is running from the loss of his brother. His entire world changed the day they killed Eli. Confused and afraid, he stumbles upon Bordentown, a small town on the southern coast of California. There he makes a life for himself, that is unlike the one he was born into. He finds contentment in becoming a lifeguard, but he’s never happy.
Bliss Meyers is a socialite. The picture perfect rich girl who parties too hard and can make anyone believe she’s a fiery mess. But she doesn’t care. Her heart is destroyed, and she’d gladly watch the world burn. Tilly was her best friend, the one she lived for, and they took it all away from her. She’s determined to let life drift by until she’s caught in a net of truth.

The wedding of Bliss’ brother brings her to Bordentown, the last place she wants to be. Her demons still haunt her, and there’s no escape from her family. She faces a week of torture and finds her salvation in a man whose laughter is the perfect distraction, but he’s not the one she’s drawn to. His roommate entrances her with one look and brings feelings she didn’t think she’d experience again. There’s just one problem — he hates her.
With the twirling passion between Carson and Bliss, the temptation to fall for her grows by the day. Carson vowed he’d never return to that life, one of pain and money. His old ways are behind him. He can’t risk becoming that person again, one with no thought for anything beyond his wealth.

Can Carson resist the pull of love? Can Bliss forgive herself enough to let herself fall?