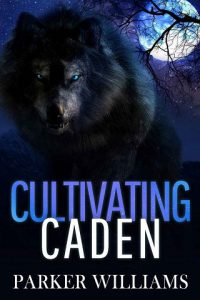 Quade Martin is hunting a murderer. A brutal killer who tore nine men limb from limb, leaving their body parts scattered across a field. Quade has been sent to dispatch this creature with expediency. Only…

When Quade meets Caden Daniels, he doesn’t understand how this skinny vegan could have the strength to commit unspeakable crimes. Caden is crying, for goodness sake. He certainly doesn’t seem dangerous.

The problem is, they never do.
Caden Daniels loves his life. He’s got two amazing friends, a flower shop, and everything is coming up roses. Until the night he makes the mistake of being in the wrong place at the wrong time, and is set upon by the biker gang who threaten him. Caden swears he doesn’t understand how the men ended up dead, he only knew he had to get away.

As bad as that was, Caden finds there are things, like Quade Martine, in the Katadhin mountains that are much, much worse.

Quade opens up a world that Caden never knew existed. Lycans, giants, and an unbelievably powerful kid named Ten show Caden what’s hidden might be more home than what Caden knew.
Especially when the secret of Caden’s green thumb is revealed.