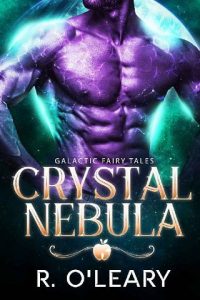 Escape from the brig, steal a shuttle, enjoy her freedom far, far away from the dark past trying to hunt her down. How hard was that? But Gwen just had to press the mystery button. Now the pretty little shuttle she commandeered is a smoking ruin and she’s trapped… on a prison planet.

The dirt-covered rock isn’t actually that bad—except for the purple grouch who’s claimed her.
He says it’s to keep her safe from the other inmates, but the longer she’s there, Gwen isn’t so sure.
Rhys has been imprisoned for a decade. Every day he mines in exchange for rations and bides his times. That is, until a ship blazes across the sky and crashes into his simple, orderly life.

The pale female that he pulled from the wreck is a pain in his ass. She’s troublesome and loud and if her sass isn’t the death of him, her knack for stumbling into trouble will be.
Too bad he needs her to finally get off this hellish rock.
If they can keep their hands off each other for long enough, they just might have a shot at freedom… assuming her past doesn’t catch up to them first.