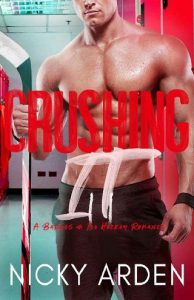 He’s fire by day and ice by night. Can she save him from himself?

Ryan Crew is a daredevil firefighter by day and a take-no-prisoners hockey player by night who’s determined to hold onto his bachelor status at all costs. He’s not only Mr. June in the firefighters’ charity calendar with abs that have gone viral, he’s also a great player, on and off the ice. But when his rash actions at the scene of a fire force him into some unplanned time off, he agrees to a job helping a friend of a friend remodel her fixer-upper.
Callie Pace bought her three-bedroom home because she could see its potential. It looked so easy on those DIY tv shows, but trying to do it herself was overwhelming. So when her friends Jake and Sophia recommend firefighter-on-hiatus Ryan Crew for the job, she jumps at the lifeline. His vision and know-how give her hope that her house can become her dream home.
Before long, the sparks are flying between Callie and Ryan. Neither can deny the passion they share, but while Callie knows she’s falling in love, Ryan isn’t ready to give up his single status.
When he’s forced to make a choice between love and bachelorhood, will Ryan decide to take one more risk . . . and score on the biggest play of his life?