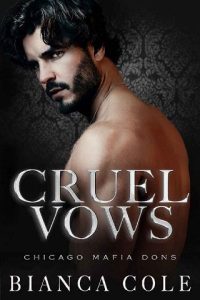 He’s a cruel man, and he’s taking me against my will.
Bar tending at the Devil’s Alpha bar was supposed to be temporary.
Until my brother got in too deep with the MC that runs it.
Now I’m stuck in this dead-end job in the worst part of Chicago.
Until a fated night, where things take a darker turn.
The night a tall and gorgeous stranger enters the bar.
He sticks out like a sore thumb, with his designer suit and expensive watch.
Axel is making a deal with the Morrone family.
The man is the eldest son, Massimo Morrone, heir to the Morrone mafia throne.
They come to an agreement, but there’s one problematic condition.
Massimo Morrone won’t supply them unless they give him me.
My brother tries to fight it, but Axel is the president.
What he says goes, and I’m not worth messing up a lucrative deal.
Despite not being theirs to trade, I end up the property of a filthy rich Italian mob boss.
Massimo drags me kicking and swearing out of the bar.
He makes it clear he wants my submission the moment we’re alone.
He thinks he can take me and make me his plaything as if he’s God.
Before I know it, I’m marched to the end of an altar in front of people that I don’t know.
A gun pressed to my back while I’m forced to say my vows.
He puts his ring on my finger, binding us together in the eyes of the law.
If he thinks that makes me his, he’ll have a shock.
I belong to no one, and by the time I’m through with Massimo Morrone, he’ll wish he never married me.