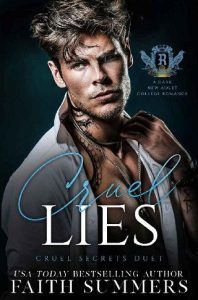 He’s my villain, my monster, my forbidden path…
Caspian Ivanov and I come from the same dark world.
One where the Bratva and the secret society reign.
And, he’s the son of their ruthless leader.
“I’ll destroy you.”
That’s the last thing he said to me.
It was on the night of the Reaping.
Hard to believe we were ever best friends.
His vengeance is, however, the price I pay for keeping a secret I shouldn’t have kept.
A secret that ripped our families apart.
It made us forbidden to each other.
That’s when he became the viperous devil.
Breathtakingly beautiful but with a cold black heart.
Like any snake, he wanted to poison me.
When our paths collide at Raventhorn University, I stay away from him.
What I don’t expect is to become his obsession.
Or to be forced to become his wife.
Except, we might not get to say I do.
Because someone wants me dead.