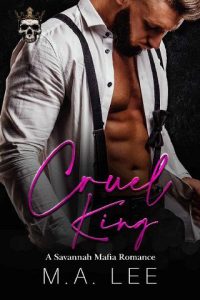 “One look at Sawyer, and I knew she had to be my queen.”
Chance has lived his entire life knowing he would one day rule the Antoni Mafia Family. He’s ruthlessly cruel, cocky, and a calculated killer. With a new business proposition lingering in front of him, Chance refuses to back down when an old rival threatens to destroy the kingdom he has helped create.
One tragic night changed Sawyer’s life forever. In the blink of an eye, her entire family was murdered by the Antoni Family Mafia. Left with only her dangerous and deceitful cousin, Vince, Sawyer quickly learns that her nightmare is just beginning.
There is a debt to be paid, and Sawyer is set to be sold as a mafia bride. He’s nothing more than a dangerous stranger, but soon he may just own her. Refusing to give up her life, Sawyer decides she isn’t going down without a fight. Only, her biggest battle may just be trying not to fall in love with the Cruel King who is after her.