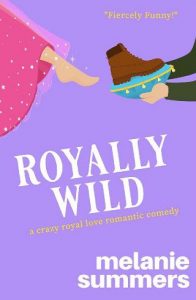 Brimming with swoon-worthy romance, seriously funny shenanigans, and an unforgettable cast of characters, the Crazy Royal Love Series Melanie Summers is sure to make you laugh out loud and believe in love…

*Please note: This series is a spin-off of both the Crown Jewels Series and the Paradise Bay Series, so it’s best enjoyed after those two.

ROYALLY CRUSHED (BOOK 1)
Princess Arabella of Avonia has spent her first twenty-nine years in an endless loop of high teas, state dinners, and the same five conversations. Every minute of her day is planned by someone else. From what to wear to what to eat, the royal handlers keep her on a tight leash. To make matters worse, they’ve extended their duties to include finding her a suitable husband before she turns thirty. Desperate for an out, she sneakily signs up to co-host a new nature docu-series, starring Will Banks, the man dubbed McHotty of the Wilderness.

Will has ladies all over the globe lining up to meet him until a hot, new adventure show comes on the scene, and his ratings take a nose-dive. Producers decide an emergency change in format is in order. Enter Princess Arabella. The pampered and proper royal is the perfect foil to Will’s rugged outdoorsman.

It’s hate at first sight, but their on-screen loathing makes for great television. Surprisingly, when the cameras stop rolling, these two finally see each other’s good sides. Can these opposites find their forever in each other’s arms, or will their differences be their undoing?

ROYALLY WILD (BOOK 2)
The tabloids are hunting them. Their families are turning on them. Can their love survive?
Despite the odds, Princess Arabella of Avonia and rugged outdoorsman, Will Banks, fell in love while filming a reality show in the jungle. But that’s another story.

While she’s making room in the royal closet for his hiking boots and backpacks—right next to the crown jewels—the show’s producers are editing together film footage that could turn their romance into nothing more than a showmance.
Private moments caught tape and aired for the world’s viewing pleasure are about to turn their world upside down.
Can love to conquer all?

ROYALLY TIED (BOOK 3)
After a whirlwind romance that has taken them all over the globe, rugged survival expert Will Banks and Princess Arabella of Avonia are getting ready to take a trip down the aisle.

With one hilarious disaster after another ruining their plans, Will and Arabella must figure out how to pull it all together in time to say ‘I do.’