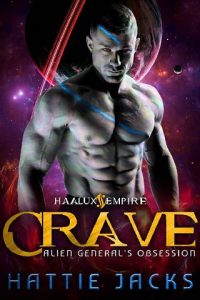 What’s worse…being abducted by aliens or being a host for one?

TARA: Worse turns out to be a terrifying alien General hell bent on claiming me, and my unborn child, for himself.
He wants complete submission and there’s no denying what I see in his deep red eyes, or the flash of his electric blue markings. He thinks he’s the perfect specimen of a Haalux warrior in every department.
I might not have been in this galaxy for long, but I’ve got a trick or two. There’s a surprise waiting for the General and he’s not going to like it.
Not one bit.

KYLAR: I’m everything a Haalux warrior should be. I fight, maim and kill for my Empire without question.
The pregnant human female is mine, the spoils of war that I’m keeping for myself.
Because the Empire can’t call to my damaged soul in the way she does. Her ripe body and calculated defiance call to me, soothe me and push me to breaking point.
She has become my obsession and I’m going to tame her if it’s the last thing I do.