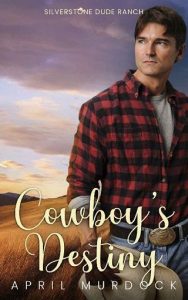 They say the place is magical. They say people fall in love there. Could a dude ranch really be that special?
Kate Dutton believes in true love. She also believes that some couples are meant to be together. She hasn’t found her true love yet, but she knows… or at least hopes he’s out there somewhere.
Houston Shipley believes the rumors that Silverstone Dude Ranch is a place where couples fall in love is fake news. But what should he do about it? Debunk it, that’s what. And maybe get some publicity for his Texas spread, too.
When Houston insists that he and Kate pose as a couple to debunk the rumor as a public service, she thinks he’s just a little off his rocker. He won’t back off, so she stops arguing. It’s not like they’ll actually fall in love. She’s pretty certain the guy she’s known most of her life isn’t her knight in shining armor.
But once they’re checked in at the dude ranch, things seem different. Kate starts to wonder if maybe there’s some truth to the rumor. Houston is still a non-believer, but something is going on between them.
Will these two embrace how right they are for each other? Or will they reject their destiny just to make a point?