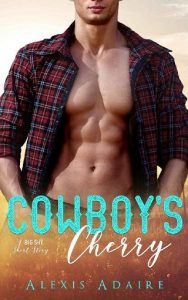 What in the world are the two of us doing in bed together?

Big city girl Lucia Morales’s boss at the New York Tribune has to bail out of an assignment at the last minute, and she’s stunned when the editor agrees to let her cover the story solo since she just graduated and has only been on the job a few months. The problem is that the article is a story on old-school cattle ranches, and Lucia thinks cowboys and everything about their culture is silly and unsophisticated. So she’s less than thrilled when she arrives at the Big D Ranch in Montana and is greeted by searing heat and all the smells associated with several hundred head of cattle.

Ricky Bascom has never been to New York City. Hell, he’s never even been to Helena, and it’s only a three-hour drive. So when this mouthy newspaper reporter arrives at his ranch and starts rolling her eyes at his lifestyle, his first inclination is to send her on her way with a kick in the saddle. Then he decides instead to give her a personal demonstration of what the Big D is all about. Maybe she’ll change her mind after she’s been rode hard and put away wet. There’s only one problem: This hot little pony has never been ridden by anyone before.