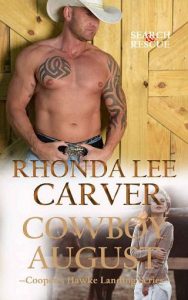 Strength had always been her greatest asset, until August West took her life by lasso…

Over her dead body would she allow her grandmother to give the family farm to a cocky cowboy. So, Tobi Saint dropped everything and headed to Cooper’s Hawk, a place she swore she wouldn’t step foot in again, but the vague call she received concerned her.
August West had lived a lot of places in his lifetime, but none had felt more like home than Cooper’s Hawk. He was back and liked working on River Saint Farm. The owner, Isobella, had taken him under her wing and treated him like her own. As her health started to decline, she asked for his help in convincing Tobi to take over the farm. He wanted no part of the scheme. His memory of Tobi involved a kiss behind the barn a second before she punched him in the nose.
Yet, how could he deny helping Isobella?
The old chemistry remained between August and Tobi. Things start to heat up and a fiery kiss between old friends leads to a moment that changes everything.
He found himself unraveling. For the first time he saw a chance at a future. A chance at love. But there was more to Tobi than met the eye. She’d been hurt by everyone she loved and to find his way into her heart he’d have to shovel through a brick wall.
The deeper he dug the harder it became, but love was worth fighting for…