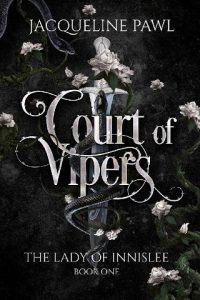 “We are enemies by necessity, not by desire. You are my perfect torture, and I would have it no other way.”

Riona Nevis has been a pawn in her uncle’s court all her life. The moment she was born, her future was decided for her: when she came of age, she would marry the man her uncle chose and secure her kingdom a valuable political alliance. She obeyed once, and it nearly cost her life. Now that she has escaped Beltharos’s cutthroat court, she will not allow anything—or anyone—to tear her from her home again.
Prince Auberon is the infamous second son of the Erdurian Emperor. He is cunning, charming, wicked, and ruthless. When the Crown Prince is invited to bid for Riona’s hand in marriage, Auberon accompanies his brother into the heart of Rivosa with two missions: secure the betrothal, and uncover a secret that could end the decades-long war between their countries.
Auberon will stop at nothing to help his brother win Lady Riona’s hand. Riona will do anything to avoid an arranged marriage. But when a high-ranking courtier is found murdered, they are forced into a shaky alliance that could change both their countries for the better…or destroy them completely.