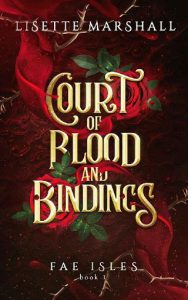 They call him the Silent Death, because he kills without sound and leaves none capable of speaking in his wake…
When the empire’s deadliest fae murderer catches her wielding forbidden magic, twenty-year-old Emelin believes her hour has come. Instead, her inhumanly beautiful captor spares her life, but carries her off on his velvet wings – into the one place from which no human ever returns.
The heart of the Fae Isles. The treacherous Crimson Court, where the Mother of faekind has ruled unchallenged over fae and humans for decades.
The Silent Death is supposed to be the Mother’s loyal servant, her invincible warrior, her ruthless, soulless killer. But in the shadows he is playing a game of his own, and he needs Emelin’s magic to win it.
If she agrees to work with him, she could free all of humanity. But can she trust a fae male with so much blood on his hands? Worse, when his smouldering dark eyes and dangerous secrets reveal glimpses of the heart behind his murderer’s mask… can she trust herself?