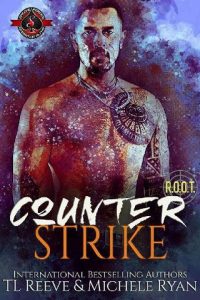 Alex Schoell is a wanted man. Eleven years ago, a contract was placed on his head, and ever since then, he’s been stuck living at the base, unable to have a life outside of work. Eleven years ago, he also met the one person he could spend the rest of his life with, Maggie Jones, aka Blood Dawn, aka Lady Absinthe. Their short-lived affair left him wanting. So, when he was given the one case that might get him killed, he called Blood Dawn to watch his six, hoping she’d say yes.

For six months Maggie Jones had been imbedded in the Colombian President’s security detail. As the head of the First Lady’s team, she had an inside track on who might want to kill the President. However, when a message only she could decode turns up on the dark web, she’s sure she’s seen a ghost. Alex Schoell, the love of her life, had come out of hiding, and he wanted her.

With Alex in Colombia, trying to protect the President, the clock’s ticking, and his life is also on the line. Will Alex and Maggie find their would-be assassin, or are they both running out of time?