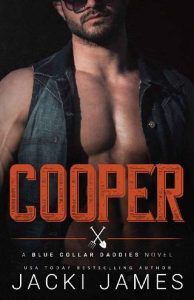 Just call him the brat tamer.

Cooper Shaw knows exactly what kind of a man he wants, and someone who is interested in being a part time boy isn’t it. He wants a boy who will turn over everything to him. But not easily. He wants to have to work for it. What he wants is a boy with spirit and sass. The kind most Daddies want nothing to do with. What Cooper wants is a challenge. Also known as a brat.
Gavin Prince is not a happy boy. He lost his college scholarship because he was partying too much, but come on can you really have too much fun? Apparently his parents think so. They have cut him off and sent him to live with his uncle until he learns his lesson.
Cooper has had about enough of the poor little rich boy that has taken up residence at his favorite customer’s home. Gavin needs to be taught a lesson, and Daddy Cooper is just the man for the job.