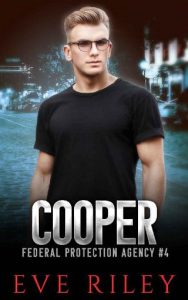 The right path can save a life…

Growing up in foster care, the only true friends Cooper Jones had were the black hat hackers at the community center. At eighteen, after being caught by the government for hacking into Homeland Security, The Agent in Charge, impressed by Coop’s skills, determined he need to work for the government instead of hacking them. That Agent saved him from a life of crime, and almost certainly saved his life.
Now an analyst and hacker for Homeland Security, Coop prefers to be behind a computer to fight his battles. Recently scooped up by the Federal Protection Agency, he is a valuable asset to the team.
Detective Jonah West has dedicated his life to helping the people of Baton Rouge and he doesn’t like it when criminals get to go free on a technicality. He spends countless hours every day being the best police officer he can to make sure that doesn’t happen often. The downside to a cop’s life is that his twelve-year-old son, Drew, spends much of his time alone with only his computer for entertainment. When his house is broken into and Drew comes up missing, Jonah contacts the FPA and asks them for help. Jonah is willing to pull out all the stops if it means getting his son back.
Can Coop and Jonah keep Drew safe while they track down the kidnappers, and will their growing closeness mean they have a future together?