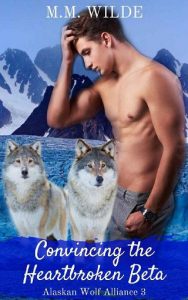 Being third doesn’t mean being last. But it might take some convincing…
Brandon is a no-nonsense Alpha shifter soldier and pack leader. After many years of peacefully living without a mate, he’s stunned to discover the pregnant omega he’s just rescued belongs to him. Having no idea what to do with this scared and traumatized young man, he charges a beta with his care. Duty demands that Brandon work with the Alliance to bring those who abused his omega to justice.
As a beta from the Guardian Pack, Cameron has dedicated his life to protecting his fellow shifters. After losing out on a forever-after when his best buddy found his fated one, Cameron’s heart is too bruised to take a chance on a forbidden omega. Not only that, but he doesn’t dare cross the older and much stronger Alpha who the omega Sascha is bound to.
Omega Sascha has suffered more than any nineteen-year old man should. However, now that he’s been rescued from the experimental prison by his fated Alpha and a caring beta, he needs both men in his life—no matter how different they might be. Sascha can’t remember a time when he’s felt as safe or loved—and will do everything he can to convince Cameron to stay.
But there’s a threat lurking in the shadow that none of them anticipated…