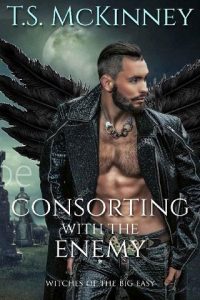 Ariel is a high-ranking, powerful, and sexy as sin Demon in the Underworld who has been trying for centuries to corrupt an angel.

Ariel’s history with the beautiful Azazel was filled with hidden desire and unbridled passion, and the Demon just could never find the strength to put much effort into trying to obey the Dark Lord’s demands that he capture Azazel’s nephew, Marchand, and bring him to the Underworld to serve as his pet. He was much more interested in teasing and toying with the Fallen Angel rather than going to war with him. But when he can no longer trick the Dark Lord into believing he’s truly trying to capture Marchand, decisions have to be made, and his actions would not only ignite a war, but send shock waves throughout the entire Underworld.
If Azazel hadn’t been so blinded by his desire to keep his nephew safe, he would have questioned why the powerful Demon kept making one mistake after another when he came after Marchand. By the time he realizes his mistake, it might be too late to protect the ones he loves. A war has come to the earthly realm, and the stakes are high. When consorting with the enemy, can there ever be a happy ending?