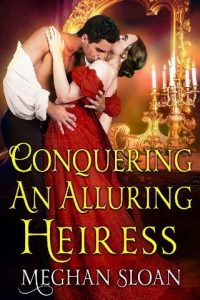 Clara St. George has learned how to take care of herself in the hardest possible way. Raised in an orphanage, she was resigned to spend the rest of her days toiling as a maid for wealthy families. One fateful day, a lawyer visits to inform her that she is the daughter of a Duke and the heiress of more money than she had ever seen in her life. Little did she know that along with a great fortune, she would also inherit more enemies than she could count. When she realizes that her half-sisters absolutely despise her, her only thought is to run away and leave everything behind. Just when she thinks she is ruined forever, she meets the Duke’s guardian, who will help her become part of the nobility’s world. What she never expected though, was that he would be so charming, that her desire for him would be irresistible… Will this be the beginning of a lustful journey with him or will she be entrapped in a miserable life with her new family?

Edward Morton is an attractive young man who has always taken very seriously the role of being the young Duke’s guardian. However, his life is about to change forever when he meets the captivating Clara, whose eyes will start haunting his dreams. Being completely mesmerised by her, he seizes every opportunity to teach her how to behave at the social gatherings and balls and protect her from the machinations of her malicious half-sisters. Day by day, their feelings deepen and the fiery attraction between them is impossible to deny, but one question remains… Will he finally dare to surrender his heart to the most ravishing woman he has ever known?

Fate might have written in the stars for them to find each other, but Clara’s social standing as the illegitimate daughter of the Duke keeps her from completely accepting her passion for Edward. Even though they are scared this burning affair might lead nowhere, it is beyond their powers to resist the temptation. The more time they spend together, the more they set their hearts and bodies on fire… Will Clara manage to break free of society’s norms and follow her passionate heart? Or will they both be doomed to a life of unfulfilled desire?