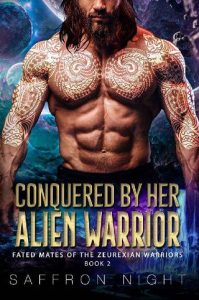 Can a woman with a broken past learn to trust and find happiness when she meets the alien warrior destined to make her his?

As a United States Reconnaissance Marine, Maggie thought she had experienced everything under the sun in her career. Losing her team in an undercover operation and barely escaping with her life scarred her badly, never wanting to trust again. As she begins to recover from her ordeal, she and a group of other women are kidnapped and ultimately rescued by seven and a half foot tall, bad-ass, muscular alien warriors and brought back to their planet, awaiting the reconstruction of their ancient artifact that will finally take them back to earth. Refusing to wait any longer, she devises an escape plan, only to land on a foreign planet, where she becomes the hunted. As fear and regret override her, she will do anything to get back to earth and find a way to save the rest of the women. That is until she comes face to face with a rugged, sexy and tough Zeurexian warrior tasked to bring her back.
Captain Ortenas of the Zeurexian Warrior Army is young, ruthless, and born for battle. As the youngest warrior to command his own warship, he stands to not only destroy their enemies, the Grusenoids, but to annihilate any others that would stand in his way. When he is tasked with locating and returning a missing human female, his mating force awakens with a deep passion and desire that he has never known for his fated mate. One that matches him in courage and wit, he will spend every moment and everything in his power to make her his. Even though she wants nothing but to leave and get back to earth.
With their rescue pod captured in the outskirts of space, Ortenas must fight in the blood trenches for his and Maggie’s life as all of Zeurexia’s enemies watch for their pleasure. As a warrior who prides himself in honor, duty, and loyalty, this determined fighter will do anything to protect his mate, even risking his own life to see her safe.
But will a secret he holds destroy the chance these two could have with one another?