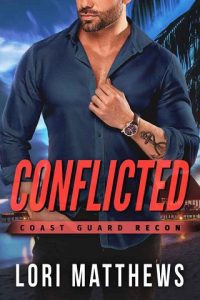 From the bestselling author of the Callahan Security Series.

Meet Elias Mason of the US Coast Guard’s TEAM RECON. As in reconstructed. As in broken and needs fixing.
Team RECON has a new headquarters now—Miami, Florida, which also happens to be Elias’s hometown. He’s been avoiding his past like the plague, but there are some things you can’t outrun. Like the death of his best friend, his past involvement with the local gang, and his first love, Andrea Torres.
Andrea has been on a path of vengeance for years. Now an agent with the Bureau of Alcohol, Tobacco, Firearms and Explosives, Andy is determined to take down Santiago, the main runner of guns, money, and drugs in Miami, and the man who killed her sister. Her current undercover assignment has her so close to caging Santiago, she can taste it.

To stay on top, Santiago has to turn to buying guns from the Russians and selling them to militia groups. Elias and Andrea will need to bury their animosity and ignore the fiery chemistry between them to run a game of deception as insiders for Santiago. Pretending to be the couple they once were in order to bring their common enemy to justice would work if only the Russians didn’t have other plans.