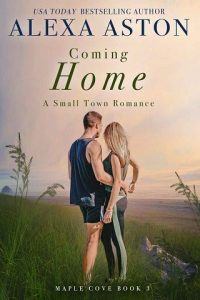 Welcome to the new world from bestselling author Alexa Aston—Maple Cove—a small town on the Oregon Coast where romance is heating up!

An attorney facing burnout who flees Los Angeles. A woman returning from Paris, ready to live for herself. And a psychopath who lands in Maple Cove, ready to wreak havoc on their lives . . .
Criminal defense lawyer Jackson Martin gets his client off on murder charges, believing the man was guilty and still could be dangerous now that he’s free again to kill. The trial depletes Jackson, and he finds himself at a crossroad in life. When the resident attorney in his hometown of Maple Cove decides to retire and asks Jackson to take over his law practice, Jackson leaps at the opportunity, which will allow him to sink deep roots into the community and practice a different kind of law.
Ainsley Robinson hustled for a buck her entire life, first baking cookies to sell at athletic events to pay her mother’s medical bills, and then working restaurant jobs to pull together the tuition to attend the famed l’Ecole Lenȏtre, one of the world’s premier pastry schools in Paris. With graduation behind her, Ainsley returns to the Cove and opens Buttercup Bakery, which quickly becomes a popular establishment on the town’s square.
Her world turns upside down when Jackson enters her bakery. She’d had a teenage crush on the handsome high school quarterback and finds him to be even hotter and smarter than she remembered. Sparks fly from their first meeting, and they both realize they want the same things in life—a loving relationship and children.
Just when it seems everything is falling into place for the happy couple, one of Jackson’s former clients decides he wishes to upend their world.

Will Jackson be able to protect Ainsley from a deranged psychopath—or will he lose the only woman he’s ever loved—along with his life?