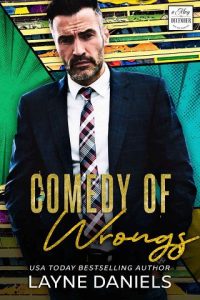 Ten years ago when my brother was going through chemo to fight the big C, he and his wife asked me to make a donation in case the treatment made him sterile. He got better, they conceived on their own, and the whole thing was forgotten by us all.
Until I got the notification that my sample had mistakenly been cycled into the samples offered for selection. Worse, that it had been used! Money eases the way for nearly everything in life, and I expect it’ll do the same for my quest to identify the woman who had received my DNA and just might be carrying what will likely be the only heir I ever create.
When I learn the local comic store owning, cosplaying, nerd-girl that my oldest niece idolizes is the one giving life to my unborn baby? Well, let’s just say my money isn’t going to ease the way here. She’s hated me ever since she overheard me advising my brother to keep his daughter away from weirdos who dress up like cartoons during her birthday party at Reva’s shop, Vault.
Seeing Reva round with my baby has me stopping to really consider the woman I’d written off as too young and too silly. The baby’s due in eight weeks, which means I don’t have much time to convince her to let me be a part of their lives. It’s a good thing I never back down from a challenge.

This May, some of your favorite steamy romance authors will gather their dirty minds to bring you a selection