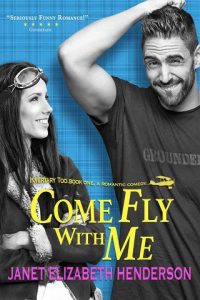 They married in their teens. They haven’t seen each other in ten years. And now they have to fake a relationship to keep their land.

At seventeen, Katya Savage eloped with her lifelong best friend, Brodie MacGregor. Everything was perfect for two glorious years—until Katya became obsessed with her great-grandmother’s legacy. To be fair, who wouldn’t get excited about having a female bomber pilot in the family tree? Brodie, that’s who. Because when Katya asked him to help her find a plane exactly like the one her great-gran flew during World War Two, he had a hissy fit and gave her an ultimatum—him or the plane. Yeah, that was a dumb move…

Anyway, now Katya’s back. With her plane. And all she wants to do is set up a scenic flight business on the land gifted to them both. Unfortunately, there are a few teeny tiny problems with her plan: 1. Brodie has his own ideas for the land that don’t involve her or her plane. 2. The family who gifted the land to them wants it back. 3. The only way to keep the land is to convince their families, the town, and a bunch of lawyers that they’re back together again.

Now, if they could just stop fighting long enough to act like they’re in love…