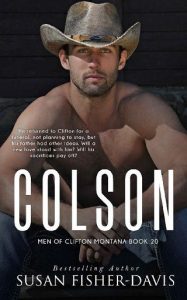 The last thing Colson Griffin wants to do is return to his hometown of Clifton, Montana, but he doesn’t have a choice. He’s returning for his father’s funeral. He just wants to leave as soon as he can, but his father’s will makes that impossible. He has done too much in his past to hurt his brother again, so he agrees to stay. Meeting Lydia is a bonus he hadn’t expected, but can he stay with all the animosity his brother has for him?
Lydia Carmichael returns to Clifton, Montana, after her mother’s death. She is finally over the man she had once loved and left Clifton because of, but when she meets Colson, she is instantly attracted to him. He tells her he is returning to Kalispell, Montana. She’s disappointed, but when she finds out that he has to stay in Clifton after all, will she be able to fall in love again without ending up with another broken heart?
Colson’s not sure he can do what his father wants, with his brother treating him like he hates him. When it comes down to it, and he does want to leave, will Lydia go with him? Or will she stay in Clifton and be disappointed in him too?