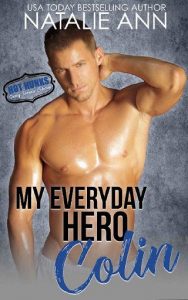 When Colin McAdams realized his lifelong dream of being an NFL player wasn’t going to happen, he put his family first and switched gears. He makes a new life for himself and his daughter that he has joint custody of. Then one day he saves the life of one of his students and becomes a local hero. Only he doesn’t feel that way, especially during a custody battle with his ex while she reminds him of what a failure he was to her.

Alexa Baxter is the baby of the family with three successful older brothers that are always watching out for her even though she doesn’t think she needs it. Things were going great, even if she was a little lonely over her dismal dating life. But then she meets the father of one of her students and sparks fly. A room full of screaming third graders, dating drama and custody battles don’t bother her, but a mysterious threat does.

An athletic director, a doctor, a construction worker, a CI Army agent, a rancher, an engineer, and a military pilot are all leading a somewhat normal life. So what do these seven men have in common? They are your average man going about their day until something out of the ordinary happens in front of them. To the victims, the strangers, and their loved ones, they went from an everyday man to an everyday hero!