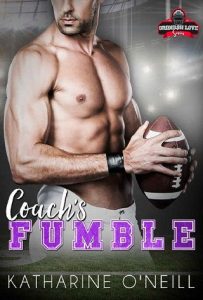 How am I supposed to do my internship when he won’t leave me alone?
Chrissie’s first job as an intern for the New England Patriots was meant to be a dream job. But she spends most of her time trying to get away from the star quarterback. Drake has made her a target of his seduction, and Chrissie isn’t interested. An encounter with a man she has a crush on feels like a relief when Drake won’t stop pestering her, but now she has to deal with the chemistry between the two of them that is close to exploding.

She’s a member of staff, my best friend’s daughter. She should be off-limits.
Coach Forrest got Chrissie the job where he works, and now he’s beginning to regret it. Her curves and her smile are a distraction, and Forrest worries when he realizes Drake has a fancy for her. After rescuing her one night, Forrest knows he’s playing with fire, especially when he gets Chrissie in his arms for the first time. He has to have her, even though he shouldn’t. It’s not just his friendship that he could lose if it gets out that he had the gorgeous intern in his bed, but Forrest is getting to the point where he just doesn’t care anymore…